Decision at Doona is a science-fiction novel by Anne McCaffrey. It was first published in April 1969. It is about the first contact between Humans and a cat-like alien species, the Hrrubans. 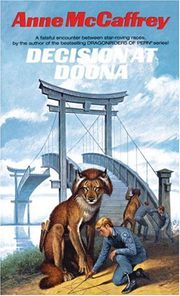 With Terra critically overpopulated, humanity is searching the stars for new planets to colonize. After the first human contact with the alien Siwannese went badly (that entire race committed mass suicide based on a verbal misunderstanding), the Terran government made a law – no further contact would be allowed with sentient creatures anywhere in the galaxy. Therefore, the newly discovered planet Doona could only be colonized if an official Space Department (Spacedep) survey established that the planet was both habitable and uninhabited.

However, the newly arrived colonists discover Spacedep had made a mistake- Doona was inhabited. The native cat-like Hrrubans present the human colonists with a difficult choice: obey the law by leaving Doona and returning to the teeming hell of an overpopulated Terra. Spacedep first ignored the colonists believing that they were looking for an excuse to return back to nice safe Earth.. and that their department could Not have been wrong (In truth - surveys of the planet showed No habitation or landing sites).

Behind the scenes is a major powerplay between Spacedep and AldRep ( Explorations and Colonization) Neither want to admit they are possibly wrong - and both want to blame the colonists as liars.

What the humans don't know is that the people they've misidentified as nomadic natives are actually more technically advanced than themselves, and the Hrrubans have their own colonization plans for Doona. Yet their planetary colonization laws leave the Hrrubans facing the same choice as the humans: return to an overpopulated homeworld, or to move forward and try peaceful co-habitation. To add to the confusion the Hurrbans have teleporter technologies so repeated landing of spacecraft are not needed after the initial landing - meaning the Hurrubans can appear and disappear at will.

Like the Earth government there are various factions also fighting between them. Some want to send in a force and kill the humans, others want to withdraw and hide, and a third want to try cohabitation.

Things come to a head with Spacedep attempting to kill the colonists (now Aldrep's responsibility) and blaming local wildlife.. And Aldrep now considering the possibility that the Hurrubans might actually be real - and worrying what these aliens will think of the human's action.

All of this being observed by the Hurruban homeworld and giving them pause if humans are even to be trusted.

Decision at Doona was followed by two other books, Crisis on Doona (1992) and Treaty at Doona (1994); together these form a trilogy.

Decision at Doona has been published in 12 editions, including German, French, Italian, and Spanish translation. The most recent (English) printing was by DelRay, October 1987 - ISBN: 978-0345353771