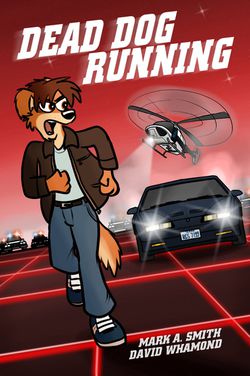 Dead Dog Running is a short comic book written and illustrated by Mark Alexander Smith, and co-written by David Whamond before his death in 2016.

The story takes place in a fictional city in southern Texas of in the year 1985. A canine protagonist named Cage was framed for murder and sent to prison, and will about to face the electric chair. Cage receives postcards from his family in Mexico and when the day of his scheduled execution arrives, he decides its time to escape his incarceration. By hitching a ride in a laundry van, the protagonist makes it halfway towards the city, however police are hot on his trail, lead by the corrupt sheriff. Cage takes refuge in the city mall and after grabbing a change of clothes, he hot wires a sports car on display and makes his get away right when the sheriff and his squad of officers arrive. The chase between the police and the protagonist rages on the highway, but Cage easily out runs most of them.

He ends up in the desert but is found by a now angry-and-trigger happy sheriff. He is about to cross the train tracks with his now heavily damaged escape vehicle, only to have a passing freight train hit his car. The sheriff approaches the wreckage with his pistol drawn, and is about to finish off his fugitive when he finds there is no sign of Cage in the wrecked car.

The story ends with Cage climbing over the fence and celebrating his well deserved freedom.