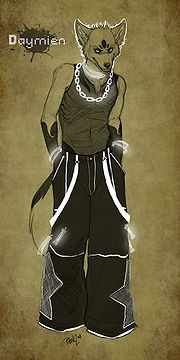 Daymien was a furry fan in the Chicago, Illinois area of the LAFF region. Daymien lived in a furry house with boyfriend Vidar and also ArtySkox, DBruin, Brathor Cyr, and Soro. He grew up in Minot, ND and moved in with the house in March of 2007. He took classes at the local college aiming for a degree in electrical technology and worked as a freight delivery driver for a motorcycle accessory manufacturer. He loved dancing, skiing, video games, kayaking, hiking, scuba diving, star gazing, kites, Renaissance faires, RC fliers, and traveling. He joined in on LAFF events like LAFF bowling and Boo at the Zoo. He attended Midwest Furfest from 2007 to 2012 as well as several other conventions. At the very young age of 27, Daymien passed away after a battle with alcoholism. He will is greatly missed by his friends and family.