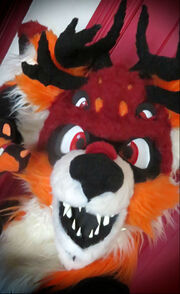 Chordsy in suit as Puck
Chordsy (sometimes Chordsy Kat) is the primary nickname and avatar of artist Dawn Best within the furry community. She is a freelance illustrator, author, and self-proclaimed greymuzzle living in Central Pennsylvania. She has been active in the furry community since the mid-1990s and considers herself "less a professional and more or less a professional fan"[1] within the community.

Chordsy is most known as an artist for Archie Comics' Sonic the Hedgehog series, working primarily as a penciller but occasionally as inker and cover artist. A rare case of a fan turning pro, she was invited to join the ArchieSonic team at 19 years of age after submitting samples to series writer Ken Penders, based on an original script.[2] Since then, her illustrations have been featured by major publishers and independents alike, and she has self-published several serials of her own creation including the highly-acclaimed web-series, Sylvanna. Additionally, Chordsy serves as lead artist and one of the programmers for Age of the Four Clans. She also operates as a puppet, prop and costume maker under the name FauxFox Puppets.

Chordsy has several avatars within the fandom, including:

Along with her lengthy history as a furry artist, Chordsy is a pawpeteer and enjoys performing and designing puppets. A fursuiter and maker, she occasionally performs as Puck, often opposite her real-life daughter, in Youtube videos and on social media.