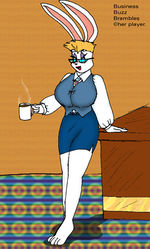 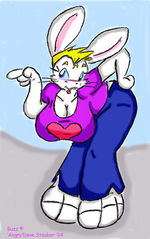 AngryDave or "Angry" Dave Stauber is a furry artist who is best known for creating the anthropomorphic bunny character, Buzz.

Anita "Buzz" Brambles is an anthropomorphic bunny on FurryMUCK who is best known for two traits. When new furs meet her, they are inevitably attracted to her oversized bosom (a trait intentionally added by her creator, Angry Dave). However, Buzz is more well-known on Furry for her personality: she's a Southern Belle bunny (with a heavy accent) who is seen as sweet, amiable, and prone to giving big, soft, and bosomy hugs. (She is also generally not a yiffy character, preferring conversation to outright TinySex).

Her nickname comes from the fact that she is depicted as having a short, military-style "buzz cut" hairdo.

Buzz has been a popular character with a number of furry artists. Angry Dave manages an archive of Buzz's pictures, both by himself and (many) gifts and contributions by furry artists.