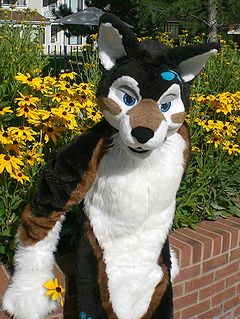 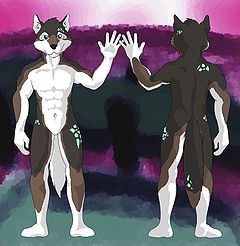 Stathgar (born May 1986) is a fursuiter and furry artist who lives in Redmond, Washington, U.S.A.

He started drawing furry art in 2003, but did not discover the furry fandom until almost a year later when someone called him a furry in response to one of his drawings.

Outside the fandom, Stathgar is a software engineer and electronica musician.

Though Stathgar's first fursuit was homemade, it was quickly retired and the character was completely redesigned. The design as it is today was finally solidified when commissioning a new fursuit from Arend Studios. This new suit (seen on right) debuted at Anthrocon 2008.

Since then, Stathgar has designed and commissioned fursuits for two additional characters:

Stathgar's character is a wolf with clusters of blue spots above the left eye and scattered around the body. Since they were originally drawn as green, it has sometimes been said that they act as a mood ring. Their origin has never been officially explained, but one story is that they are they are scars from a magic spell gone wrong.