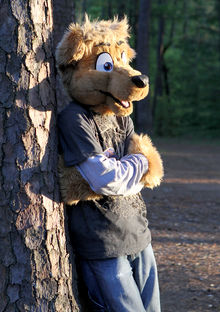 Dash Reete (His full name is Dashial Reete; born Oct. 5, 1984) is a furry from Dallas, Texas, United States. Dash's first name comes from a shortened form of his Halo gamer tag, Dasher, which he used while playing with friends, and his last name is a shortened form of the word "retriever."

Dash is a golden retriever that is distinguished by his long headfur and goggle with blue lenses in a slightly oval-shaped black frames and band. He has always been a golden retriever since joining the fandom in July 2007. He decided his fursona upon remembering a real-life conversation with coworkers a few months prior. During this conversation, which centered around what animals certain people at his job would be, his boss, upon joining the discussion, seemingly instantly told him that he would be a golden retriever.

Dash's fursuit debuted initially as a partial at Furry Fiesta 2010.