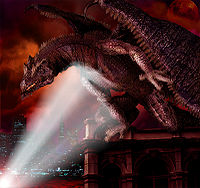 Zakat as captured in a photo taken by a random keen-eyed passerby.

Darkus Canning (in full Darkus 'Zakat' Canning) is the owner of the FurHaven community forum. He is also known to frequent Second Life and the UKFur forums, and his fursona is a red dragon.

Darkus is 12' tall, and 50' long. His element is water and he is able to fight with magic.

Darkus' scales are blood red with hints of ageing across them, including some scars of ancient wars and burn marks on his left paw and neck. His eyes are blue, and he wears a cyan Collar with a YingYang inside a paw tag.

Not much is know about this dragon, as all records of him have been erased and many who do know of his existence choose never to speak of him. Zakat chooses never to share his life with anyone, unless he deems them worthy and trusting. This has only happened three times, and he was betrayed once.

Having lived a life of seclusion and hatred, Zakat was punished for his hatred of others and made to wear a pendant chain around his neck, forced to follow specific rules and removed from freedom. He learnt to seclude and teach. His views upon life and what governs it are radically different from most others, simply because he has seen most of what history offers.

Several key pupils that were under his wing learnt that Zakat is indeed one of the last dragons who have divine power given to them by elders of the council circle. For this he is hunted and feared. What really happened all those centuries ago, no one knows. He thought he has lost happiness and thoughts of inner peace until now, when someone special entered his life bringing him hope and joy for the upcoming wars to come.

Usually, Zakat would never consider another as his superior or master, but when Zared Sabretooth crossed his path, Zakat decided, after an exchange of intellect, that it would be an interesting change of pace to allow himself to be mastered. Thus, Zared Sabretooth became his master and things changed for the better in Zakat's life. he now lives happily with Zared in his cave.