Darkmaster (born February 6, 1995, also known as Dark, DarkWolf, DarkW or DW and less commonly known as Sting or STT) is a furry writer roleplayer and game master originally from Bowmanville, Ontario, Canada who is currently[when?] living outside Marmora, Ontario, Canada near friend and fellow furry Wolfmaster. 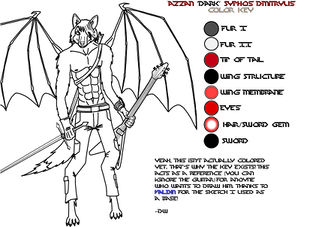 Line art reference for Dark. Cleaned up from a sketch drawn by Valdin at Fur Affinity.

Dark's main fursona is a seven foot six inch winged vampiric grey wolf. Among his other fursonas are another vampire, who is an arctic wolf with ice-blue colored hair and watery-colored eyes named Jude, and a robot-hating panther who goes by the name Parker.

Dark is an avid gamer, having owned at least one of the past two generations[when?][clarify] of Sony and Nintendo consoles, preferring to stay well away from Microsoft's "pay more"[clarify] model for Xbox Live. He's also fairly active on Steam despite owning very few PC games.

He is mainly seen roleplaying on a web site he runs, ZEJ Roleplaying, and in a chat room[clarify] on the popular (but slow) Chatzy service under the name Furry.