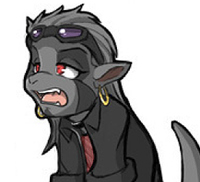 nek0gami, also known as Dark Nek0gami and Culgar, is a male furry artist best known for his concept of LGDs, or Living Gasm-Drives, which are A.I. equipped, liquid-metal sex-toy anthroids. He currently lives in Florida, USA.

In August 2006, it was noted that a particular picture of Nek0gami's character, Nekogirli (drawn in 2005)[1] looked remarkably similar to a picture drawn by Neolucky (drawn in 2004).[2] An overlay was done and it proved that there was a trace involved.[3]

When asked about it, Nek0gami claimed that:

A number of people were not happy with Nek0gami's response. After certain users made their own versions of the Neolucky trace, Nek0gami made post on Fur Affinity about it, where he admitted to tracing the image.[citation needed]

However, he claimed it was something he did when he was first trying to learn how to draw, and accused everyone who pointed out his wrongdoing as bringing up "old shit", despite the fact that Neolucky had just learned about it at the time.[4]