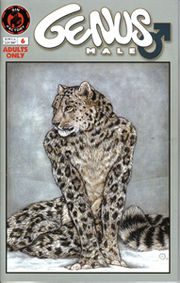 Dark Natasha (born 1972) is a furry artist from Evergreen, Colorado, who began her art career doing covers for Furrlough and a comic for Genus published by Radio Comix. Her first furry convention was ConFurence 10 in 1999. Her artwork proved to be popular, and since then she has been one of the top-selling furry artists[citation needed]. Her work tends to be realistic and were-like, but she also does pure fantasy paintings.

Dark Natasha is probably best known for her paintings and drawings of fantastical creatures (not just furry), but she has done works in a variety of media and genres, including very realistic pictures of birds and other animals. She is a regular at Further Confusion and generally sells prints as well as doing sketchbook commissions. One of her more well-known pieces, a five-foot long, two hundred pound dragon, was acquired by TCI/Jones Intercable CEO Glen Jones. Today that sculpture resides in the main lobby of the telecommunication giant's headquarters in Denver.

Dark Natasha was introduced to furry art with the work of Terrie Smith, although she had been drawn to fantasy artwork and had previously drawn anthropomorphic characters.[2] Her first furry convention was ConFurence 10.

On May 2nd, 2007, Dark Natasha was reported as having been involved in an auto accident when an Chevy Tahoe ran a red light and blindsided her car. She was was trapped in her vehicle and the Jaws of Life were used to extract her from the wreckage. She was hospitalized for several fractures to her pelvis and released after several days. Following the accident she stayed with her mother until she was able to manage independently again. [3] [4] [5] By July 2007, Dark Natasha had recuperated, and she continues to attend various furry and fantasy conventions.