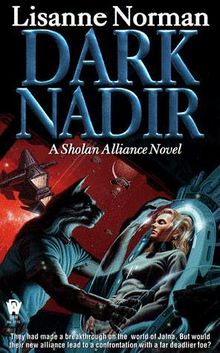 Dark Nadir is the fifth book of the Sholan Alliance Series, written by Lisanne Norman. Although they are best classified as science fiction, they also include elements of fantasy and romance. Many of the main characters are telepaths, which is one of the major elements of the series.

The world of Jalna has revealed many secrets to the Sholan-Human teams sent there on a rescue mission. They had discovered on of the methods Valtegans used to control other races, had learned how deceitful on of their own allies has been, and were about to begin negotiations for an alliance with several newly met races.

Yet the planetary conflicts had led to the injured Carrie and Kusac being placed in cryo on a non-Sholan vessel, with Kaid desperately trying to rush them back to Sholan medical facilities. But before they could reach their rendezvous point, the ship they were on was caught in a Valtegan trap, leaving Kaid barely enough time to send Carrie's and Kusac's life-pods into space in the hope that they'd be found by friendly forces.

Kaid was certain he and his people were doomed until a massive vessel suddenly materialized, scooping up both Kaid's ship and the Valtegan foe. Now all of them were prisoners of a completely unknown people. And only time would tell whether they'd fallen into the clutches of an even more deadly enemy than the Valtegans...