DarkXander is a furry fan and Cyber Security Engineer who lives in Phoenix, Arizona, USA.[1] His fursona is a red anthropomorphic dragon.

DarkXander uses the alias Xander Venterus in his literature, as it has a meaning regarding his character in the novel he is writing.

DarkXander is the founder of furry social networking and collaboration site FurrTrax.[2] Due to a pedestrian accident, he only attends a few local furry events, and prefers to pass on larger events.

In October 2014, Xander assisted Azfurs.com[3] in beefing their firewall rules, and some other minor security aspects as an act of friendship to the site after they had some minor issues.

In January 2016, Xander became aware of an SQL injection vulnerability at furry auction site FurBuy.[4] Once he had established contact with Jurann, they worked together to fix the affected Perl code and protect site members from the flaw. 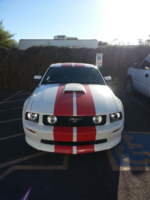 DarkXander comes from a background growing up on a family ranch, competing in local rodeos and other equestrian events for most of his life. his other activities of interest included weight training, trail riding, camping, shooting, and Sports Car Racing.

DarkXander is a Certified Information Systems Security Officer(Validated by the US Dept. of Homeland Security)[5], and Certified Ethical Hacker, working under the title of CyberSecurity & Network Engineer. He is also known as a Linux system administrator and programmer, and has a background in security auditing, Cisco CCNA, and SQL, with experience in both government and private sector information technology operations and management. He holds 29 technology-related certifications[6] covering topics including computer forensics, Unix and Linux system administration, network security, HIPAA security standards, virtualization, and RackSpace's CloudU cloud computing platform. He also says he has been affiliated with 14 law enforcement agencies in a Computer Forensics capacity.[citation needed]

During the DesertBash X charity event,[7] DarkXander won the Intel DesertBash LAN Fest's case mod contest for the "most impressive and radical" PC build, with his six-CPU, water-cooled, custom-built system.[8]

Xander competed repeatedly at the now-defunct Firebird Raceway on the Gila River Indian reservation in Arizona; first using his 2004 Mustang Stroker 4.2L, and more recently a 1996 Mustang GT and a 2007 Ford Mustang GT after the 2004 Mustang was totaled by a reckless driver. After Firebird Raceway was closed and later renamed to Wild Horse Pass Raceway, Xander returned several times to race before being kicked off temporarily for a clothing violation in which an official complained that his pants didn't fully come down to his ankles - an offense disputed by Xander.

Xander refuses to race for money or car ownership, because he's "not in it for the stress or hassle of high stakes, just to have fun, and enjoy the rush". When at official racecourses, Xander only competes in amateur, exhibition, and practice groups. He also frequents car shows, and sometimes street racing events. Thanks to extensive dyno-tuning and modifications, Xanders 2007 Ford Mustang GT pulls 0-60 MPH in 4.2 seconds.