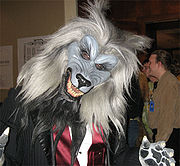 DarkFang Blackpaw, along with Ysengrin Blackpaw, is a co-founder of Running Wolf Productions, producing fursuits and other costuming items.

Born and raised in central Florida, DarkFang grew up with a variety of interests including theme parks, F/X work, character acting and animation, aviation, technical drafting, and of course, wolves and canines. He often enjoys scuba diving and aviation.

In 1996, after turning 19, he entered the US Air Force pursuing a military aviation career as a C-130 Loadmaster. That same year he discovered an SFX company in Texas named Wolf Studios. He fell in love with their creativity and attention to detail, and connecting with their animalistic spirit and style, he redirected his career to accommodate both.

From then on, every moment of free time was spent at either Wolf Studios or in his Colorado apartment turned SFX shop where he practiced sculpting, mold making, airbrushing, and werewolf acting. Following the honorable completion of his four year term he moved to Texas to devote full time to learning SFX and haunting.

After the untimely passing of Wolf Studios' founder, Lance Pope, he moved to California with his business partner Ysengrin Blackpaw, where together they opened Running Wolf Productions.