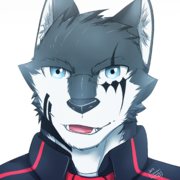 DarkDragon563 is Malaysian artist, born October 4, 1990 .His old name was graydragon02, the creator of D-TACTOR series[1]. So far there had 3 series , currently the release a bit slow due his personal work. He also an UTAU user and involve it in 2015 and the singer character knows as Darky Ryu.

DarkDragon563 also knows as DD563 as his short name, DD563 doing a lot improvement work since he using tablet for drawing. Before , he only using a paper and then scan using scanner. He also experience making manga art, illustrator art and also cell colouring art. For almost 9 years , he already make more than 3000 art. He first appearance as graydragon02 when he joining Deviantart in 2006 and Furaffinityin 2009 . He starting doing comic call Digimon D-Tactor in 2008 and end the series in 2010. For the second series call D-Tactor Dragon Riders, the series was originally 100% anthro and furry character, many his friend join the series, the series was first made in July 2010 and still on going until now. For the third series called D-Tactor Fatal Force shall be made in 2015.

DD563 had resolve to defeat NG art ( NULL GHOST ) , the reason was to improve and motivated himself in artwork but few years after that he just move on because he realize that be artist is not for defeating someone, but is to entertain people. He also started to involving in UTAU.

In 2016, DD563 declare he retired and stop involving in furry fandoms because he more prefer to be "just an Artist" and also he seeing furry fandoms now-days getting more corrupted. So, he decide to stay away and preferred a professional conversation only. He also can be sharp tongue and mean for those only who trying to involved him into furry fandoms .

DD563 fursonas was black/gray dragon with a scar on his face, the scar that represent 3 diamond that had is own meaning , such as BELIEVE, HOPE , and COURAGE. DD563 also had his wolf side and tiger side with same colour on his fur and he can switch between dragon or wolf or tiger. In May 2015, his rename his fursonas as "Darky Drago Ryu" and currently knows as Darky Ryu.

There is three series that he been made and planned to made;

DD563 was a big fan of digimon series, specially character of Wargreymon , Exveemon and Cyberdramon. Then he decide to make a stories about a boy who lost his partner. Riz is the main character and his partner was exveemon, the story line was a bit confuse and get a lot of critique from many people , specially the stories is almost like yugioh. The series was start release in 2008 and end in 2010 with 51 episode. Then in 2012, DD563 decide to remake the series and wanna give the better story line[2]. So far, when he try to release first episode, there is many positive view than before.

DD563 created this based from his real life and adventure in his dream. Ryuzin Voltex is the main character , a blue dragon who wearing a goggle on his head, is a thieve that steals for living, until one day Ryuzin got weird mission and some accident happen on Ryuzin's life that change everything. This series got so many critique based from story lines and the quality on art. The series is also rated as 18x since there is some mature scenes . This series is completely 100% about anthro and furry.[3] The series began on July 2010 and still on going until now.

July 2014, DD563 decide to make another series that involving hunting a demon, werewolf, and vampire. The draft for the first chapter is already made call "The Book Of Lycan"[4] . The series planned to be release in 2015 but due to lack of support, that series is hiatus until now.

A Tale The Beast Of Darkness[edit]

An origin stories of Darky Ryu. NO information were updating until now.

In 2015, DD563 begins to involved UTAU and make some cover. In beginning he was unsure what character he might be to be sing. After that, he decide to choose one of his character that dear to him, a black wolf with marker on his eyes and face (darkdragon563 wolf form) as singer. The first voicebank is CV type and the first cover was released in March 2015 , the song title "REVERSE" , a vocaloid song that produce by Niki and original singer is Lily. That's the mark as first appearance. Since his appearance , many people confuse him with another UTAU\FURloid from japan "Rouon Aro" . DD563 state that, he just knew Aro after few month he joined UTAU when people starting to compare him and Aro.

In April 2015, CVVC voicebank type were made, in May 2015, the first VCV voicebank were make and "Darky Ryu" was choose to be an official name of his wolf character based from his nickname "darkdragon" [ DARK -- Ryu (Japanese word means "dragon"]. The voicebank also had treat mark called "Melody of the wolf". In 2016, the second voicebank released Darky Ryu; Melody Of the Wolf 2. In 2017, two voicebank release under TERA-Project (Predator, Whisper , Nova). In 2019, the third installment voicebank (Darky Ryu : Melody Of the Wolf 3) released .[5]

Compare to other user UTAU cover, DD563's style is fresh and different which didn't use original video and copy paste the character to the video , instead , he make new illustration by himself to make the video cover . Sometime in his video cover, he include his dear friend character (which is not only FURloid character) that make most Darky Ryu video is different. Darky Ryu is character that not stay in same outfit, which it can be change many time.

In 2016, Darky Ryu is officially had MMD model, make and distribute by Japan MMD artist Torata[6] and second ver was released in 2017 which contain 5 new Darky Ryu outfit.