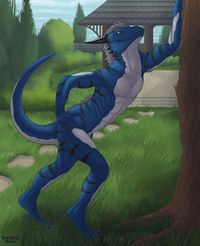 Danza is a furry artist from Nottingham, United Kingdom.

He has been drawing since late 2007, and specialises in dragons and vore art. Danza's first appearance at a convention was at ConFuzzled 2011. He is currently a full time furry artist and mostly takes commissions in the form of YCH auctions. Minor contributions to the fandom include coining the term "Price Wanker" and drawing artwork for convention selected charities.

Danza's character is a blue and white wingless or winged [switches between them], usually-feral dragon. He has a crest of white hair running down his back, and black stripes on his back and limbs. His tongue is purple, and he has black horns on his head and cheeks. once Danza stated on his live streams that the name Danza originated form an Xbox live account made around 2003