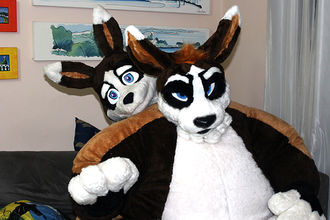 Danny and the two versions of his fursuit

Danny (a.k.a. Danny Lauderdale) is a Brazilian furry and fursuiter. His fursona is an overweight foxroo with brown, black and white fur.

Born in Rio de Janeiro, Brazil and now living with his wife Patsy Purrfect in Santos, Brazil, Danny started attending fandom activities in 2012, when he joined the Furry Brasil forums website. Discovered the furry fandom through internet searches on mascots and costumes of characters for children's parties, while still a member of a comedy group based in Youtube.

He is an admirer of the fursuiting art and Fat Furs related stuff.

His first appearance was at Invasion Furry Furgames furmeet in 2013. In the next year, he founded with other furries and fursuiters Furboliche, a furry bowling event, and in 2016 helped founding Brasil FurFest, first hotel-based furry convention in Brazil. In 2018, Danny joined the staff of Megaplex convention.

The name of his fursona was originally spelled as "Dannye". The surname "Lauderdale" used often, is a tribute to the city of Fort Lauderdale, Florida, where his real life family used to have a vacation house in the early 2000s.