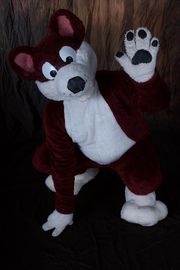 He is an active member of the Ontario (Canada) Furs community and can be seen at various events throughout Toronto and surrounding areas. He also appears as Danny Dingo (not to be confused with the Blinky Bill character of the same name) at various events, festivals and parades throughout Southern Ontario. His 2007 music video for the Bobby Lewis hit, "Tossin' and Turnin'" as well as his other music videos of popular hits have been featured on both the Funday Pawpet Show and FursuitTV.

Outside of furry and joining the fandom[edit]

Erich has had a keen interest in the creative arts and cartoons, especially those with anthropomorphic animals from an early age. He first discovered the furry fandom in 2005 when he was searching for pictures of a white fox mascot head, but didn't really become involved in the fandom until late 2007. Even as a child he knew he wanted to work in audio and video, as well as in mascot performance. He was always interested in checking out how movies and recordings are made, how VCRs and tape players worked and were always looking to learn about his favorite movies, cartoons, songs, musical acts and the like, which led him to his somewhat trivial knowledge of movies, TV shows, and music.

It wasn't until he was in high school when he got his first mascot gig ever: his high school's mascot, but his first real gig was at a local county fair in Simcoe, Ontario where the mascot was a horse. Since then, he had contacted numerous organizations in the area and had gotten various opportunities, including the mascot of the Toronto Lynx Soccer Club, where he got his first paid gig, as well as professional gigs for RBC, Canada Bread, General Mills, and BlackBerry. He fabricated his first fursuit in 2006 when he was a freshman in college, which his classmates loved. He started making appearances as his character in 2007 at a local Family Fun Day. His current fursuit was completed in February of 2008 and has since appeared at numerous events throughout the Southwestern Ontario area as well as at various local fur meets and conventions. An introductory video of his current suit has been seen on YouTube, the Funday Pawpet Show, and FursuitTV. His other character: Mac Cat, a homage to the original mascot of Canadian convenience store chain, Mac's has been seen at conventions such as Anthrocon, Furnal Equinox, Furry Connection North, Midwest FurFest and Anime North. Unlike Danny Dingo, who doesn't really speak and has a more mascot type appeal, Mac Cat's beatnik hipster-like personality and distinctive voice became a huge hit when he made his debut at Anthrocon 2009.

In May of 2012, Roxy Raccoon appeared as a subservient on the Funday Pawpet Show. She made another appearance on the May 11, 2014 show.

Dingo's biggest passion is music. His father once fronted a German rock band called "Lady" in the mid to late 1970s, a band which helped launch the career of Matthias Jabs, the lead guitarist of the Scorpions, and was very popular in Europe. Dingo also shared his passion for music with his father as a child and had dreams of making a hit record. A prime example of this passion is his "Monster Mash" parody, aptly named "Aussie Mash", which like the original, tells the story of a ball.

In college, he hosted a weekly one-hour show entitled "Jukebox Explosion", playing hits of the 50s, 60s, 70s, and the 80s; genres of music he has listened to since he was very young. Dingo is also a master of impersonation and has put it to great use in his radio program.

Dingo has been drawing since the age of four and has been creating his own cartoon characters ever since he was six. His earliest character was "Juppy the Crow", a grey crow who wore a yellow baseball cap. In 2003, he created Sean Seal, a character featured in his work-in-progress story, "The Pearl and the Diamond", and thus started the first whole universe of characters that he created. Danny Dingo, however, didn't come to light until mid-2006 when he saw a picture of Durango Dingo's fursuit and thought that a dingo would make a great character. Dingo's passion for toony art has grown and it shows in his Fur Affinity gallery.