A dance is an event at conventions or other gathering. 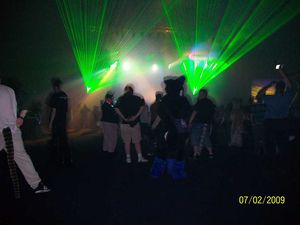 A Furry Dance or rave is a type of rave/dance event held at a Furry Convention, where a Rave dance is organized for attendees to dance to. The music typically consists of fast-paced electronic music, played by selected DJs with genres ranging to House, Trance, Techno, Jungle, and remixes. These are often accompanied with laser lights, strobe lights, and/or artificial fog to enhance the dances effect. Such events are almost always held during the night hours. Some conventions also feature a "Fursuit dance" where the musics pace is slowed down so Fursuiters can dance more comfortably to. Recently, its becoming a popular activity on YouTube where Furry art is placed to rave music, or a furry in a fursuit is shown dancing to rave music.