Damon Husky (born February 13 1984) is a member of the Utah Furry Forum who lives in Taylorsville, Utah. His fursona is a silver and white husky.

Damon Husky has been a fan of anthropomorphic art for a long time, but only came to be part of the organized fandom in 2007.

Damon's creative specialty is as a writer, and he's spent a lot of the last 10 years involved in Play By e-Mail (PBeM) games. This included time as a member of the UFoP and writing for a vampire/werewolf sim based on Underworld.

In 2007, he was involved in a story contest hosted by Transryu on deviantART, the theme of which was Transryu's Costume Shop universe, which involves people acquiring magical costumes that later turn them into various creatures, ranging from dragons and dinosaurs to Pokemon and other mythical creatures. A member of the Utah Furry Forum spotted the story and invited Damon to his first organized furry event.

As well as writing, other artistic endeavors have included work as a photographer and building parts of fursuits.

Damon was assigned as a moderator of the Utah Furry Forum in 2008 by Hymi Jamis or "Fenn" as part of the standard rotation of leaders in the UFF. He ended his term as a moderator in September of 2010.

Damon is on the Board of Directors of Unthrocon, dealing with Dealer's Liaison and Public Relations.[citation needed] 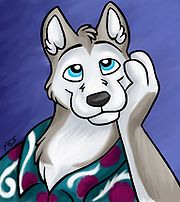 Damon is a silver/white husky. This fursona developed with the help of some friends and because of some inside jokes. Namely, that he wasn't mean enough to be a wolf, much less a werewolf, and so ended up as a dog. The name and species came from friends, and have stuck ever since.

The major defining characteristic of Damon Husky is the love of Hawaiian shirts, inherited from his creator. Almost all the art commissioned for this character features the husky in a very loud and obnoxious shirt.

The real design for the Damon character was done by Mahrkale in February of 2008. The suit was commissioned from Joecifur of B3 Mascots later that year. The partial suit was completed and delivered in October of 2008.