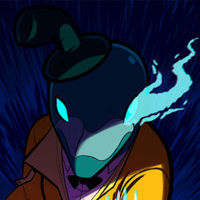 DamagedDolphin, also known as Dolfin, is a fursuiter who lives in Hawaii, USA. He is a self-proclaimed geek who works with development boards such as RaspberryPi and Arduino. He is also an avid user of the Linux operating system.

DamagedDolphin has been active in the furry fandom since 1996.[2]

DamagedDolphin's first fursona was a fox but later changed it to be a dusky dolphin. He has the common gray markings seen on that species.

He is a Zen Buddhist[3], follows the five precepts of the teachings of Siddhartha Gautama[4], and believes in reincarnation.

DamagedDolphin has a partial fursuit which was built by CorvidCreations,[5] and debuted at the Biggest Little Fur Con 2017.[6]

DamagedDolphin lived in California all of his life until he moved to Hawaii in 2015. He is married and has no kids.