He is a gamer lives in Oshawa, Ontario, Canada. Hallow has a Degree in both Computer Animation and Video Game Design

Hallow owns a Nintendo Wii that collects dust due to it's shameful library of games. He plays Super Smash Brothers: Brawl when he has company to play with, but for the most part, ignores the system all together as a disappointment due to his lack of interest in playing novelty motion sensor games or exercising with gimmicky Fisherprice toys.

Hallow owns a 60GB Playstation 3 (PSN ID Arctic_Fox_Pup} which Hallow is proud of that has never broken down like the 60GB PS3 are known for. The PS3 is Hallow's secondary gaming console and can usually be found playing LittleBigPlanet, Rockband, Ghostbusters: The Game, or his older PS2 games which he cherishes so much.

Hallow also owns a Xbox 360, and has a Xbox Live account, anmed after the fursona "Bailey Bat" (Live Account ID Bailey Bat). Hallow's favorite games on the system are the Gears of War, Borderlands, Rockband 3and playing Castle Crashers. 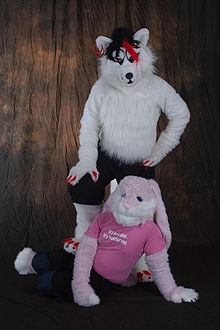 Hallow frequently can be seen at several events and meets. The suit was designed originally by Noble Productions, but the suit has had some custom modifications to it involving self-made feet, special earrings, and costume pieces. Hallow's suit has appeared at serveral Toronto based events and at Anthrocon 2009 where he secured the bragging rights of "First Fursuiter".[citation needed]