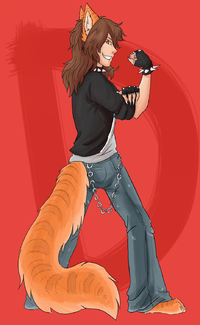 Daleo Star aka Nekleo (born 1988) is a musician located in suburban Cincinnati, Ohio, USA who was once a member on the Furrie Haven forum, but in 2008 founded a Cincinnati Based Furrie Board called Second Haven after some disputes between administrators. His character is a neko, half human and half cat. His breeds are British short-hair and Maine Coon. Although his fursona is often show as an Adult, Daleo is also a known babyfur.

Nekleo started in 2006 as an electronic instrumental solo project. "The Nekleo Experiment" is the first album finished; though, it was never released to the general public until July 2011 when he released singles of each song for iTunes and Amazon. The second album "Shapeshift" has been released to the general public November of 2008. Music is updated on his YouTube accounts, but there has been no announcement of a new album coming out anytime soon.