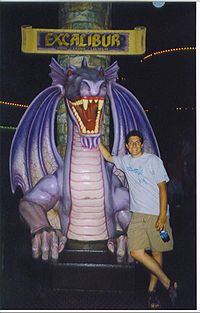 Dalaraga Sareluss, better known as Blake Thornhill in real life, residing with his parents in a two-story house in Las Vegas, Nevada, and is currently unemployed. His interests are malls, arcades, cartoons, video games, the Internet, cars, swords, electronics, and furries.

Originally human in his story, Dalaraga had a strong spiritual experience at 18 which led to him transforming into Dala. It is unsure whether or not he was naturally obese or had gained his weight over a period of time. His parents saw this form as a tremendous shock, and Dala left so that his human mother wouldn't break for the worse.

He moved into an apartment in a town where people like him who had transformed into furries, had gone for refuge. Longing for a roommate, he met his match in a well-mannered, generally happy hippo anthro named Hammond J. Sunderfield. Dalaraga, being a open diaper lover (literally) by the time he met Hammond, did not seem to gross or irritate his hippo friend. Hammond later revealed that he secretly loved diapers as well. With Dala's coaxing, he managed to get Hammond to wear a diaper, and both of them went 24/7, eventually becoming incontinent but not really minding. They are very good friends, and love being rubbed on their diapered bellies.

Dalaraga also has awakened family who he has met, and visits on a constant basis. He works for Loupy as a diaper mannequin for the Daddy Series Fatfur Edition Diapers and is not ashamed of his work. Being a bit of a fighter, he is skilled in Dragonball Z Style Fighting. It is said if you rub, scratch, or massage him in a place he likes, he becomes calm to the point of physical apathy. He is also a fan of constant weight gain, never satisfied with his level of fat. Although capable of turning any substance into fat by breathing in, he wants to earn his weight. To him, the next bigger diaper is like a fun challenge for him. He also encourages Hammond to keep up, as he doesn't want to dwarf Hammond in size.

Blake wants to go to at least one furry convention, hangglide at least once in his life, build something that will change the world, and retire on the Pacific Ocean coastline.