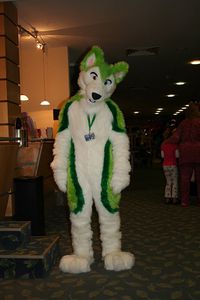 Daisuke has been a furry since March 2007. His main fursona is a green husky, and he also has a secondary character, an orange/black wolf called Miles.

Daisuke has one fursuit, which depicts his husky fursona. It was built by Don't Hug Cacti and debuted at Eurofurence 15 (2009).[2] This was Daisuke's first convention.