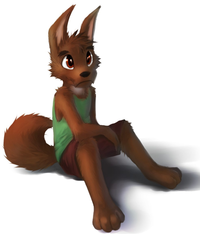 "Little Brother", a drawing of Dael Macro by Thanshuhai

Dael is a Communication Arts student of UPLB.

Dael became an official member of the furry fandom in September 2009, making a Fur Affinity account later in January 2010.

His fursona is a kangaroo-dog hybrid which he calls with many names, like "dangaroo", "roodog" or "kangadog." He has distinct fang-like protrusions on his character's muzzle, which became known as "muzzle bangs."[citation needed]

Although Dael started out as a writer, he slowly began transitioning into a traditional artist and a musician. He is now professionally the latter two.

Dael is starting to take music commissions this 2013.[2]