Ron Overdrive, aka DJ Overdrive, is a young Internet Radio DJ working for Club 69 Radio. His stomping grounds in Second Life have been The Forest since his avatar's birth on July 10th 2005.

Ron started off as a bouncer for a small time club which gave him a chance at becoming a DJ. He rented out a Shoutcast server for a few months selling his services as a freelance DJ. He was the opening DJ for Club Essence and has done many events for The Forest. Since then he had his own club, The Core, which was forced to close due to the Camping Chair fad which plagued Second Life for some time. Now he works for a full fledged internet radio station called Club 69 Radio and is an Officer of The Forest.

As of May 29th 2006, he was no longer a Forest Guide as Anshe Chung, the owner of The Forest, decided to silently liquidate The Forest as she did once before in the past to force a rebuild. The Forest Furries were replaced by the Dreamland Furries group and the officers, Ron included, were stripped of their powers. Ron encouraged his fellow officers to pool their resources to open a new sim for their now exiled community later named by the community as Serenity Woods, where he and his fellow officers are now known as Woodland Guides. 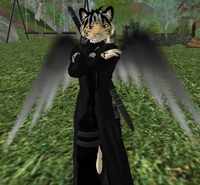 As of Dec 2006, he was no longer with Club 69 Radio as there was a conflict in interest.

As of June 2007, he is no longer the owner of Serenity Woods. This is because of the sudden loss of employment that had occurred. Because of this he opted to sell the sim. Originally he wanted to transfer it to one of the other Woodland Guides, but after a hard evaluation of the current staff he concluded no one was financially stable enough to take over. The conclusion was the selling of Serenity Woods to a few neighbors who supported the community and wished to preserve it.

Overdrive is an active member of the NY-NJ-PA local scene.