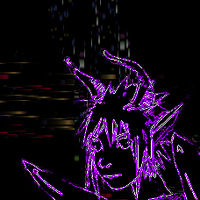 DJ Oavatos is the stage name of a DJ and Producer by the name of Skyler (born 1991) from Columbus, Ohio, U.S.A. DJ Oavatos has claimed to be DJ'ing since the age of 14, as well as producing at the same age. She DJ's many conventions all over Ohio, and is most noted as a Happy Hardcore DJ.

Oavatos, who has also used the aliases Dragon On Salvia and DJ DOS, is male to female transgender, currently male as of 2009. Oavatos' fursona is a Dragon.

DJ Oavatos has stated that her first musical experiences where with a Yamaha PSS-680 she was given at a young age by a family friend. Being a troubled child, music was a good outlet for her, often playing the keyboard for hours out of the day. She was later gifted a guitar, in which she grew very attached to, and a drumset, having a natural sense of rhythm. She later became very bored with the sounds her synth had to supply, seemingly using up every ounce of power within the synth. She would later learn of circuit bending, and became hooked to the possibility from the very beginning, bending the circuits on her Yamaha, as well as Distortion pedals, multi-effect units, electronic toys, and drum machines. This would open up a new world of sound to her, which opened her to experimental music as well as IDM and breakcore.

She eventually started looking for a more creative atmosphere, soon finding that her love of computers could become an aspect to the sounds she wished to create. She began with an old copy of Cakewalk she had lying around instantly becoming emersed in the world of audio production. She would later move on to Frooty Loops as a gift she received from a friend. Eventually she asked an artist named Shamanavi what software he used to produce, and soon after picked up a copy of Ableton Live. This would immerse her into a new world of creative production, later releasing her first torrentable album named "Calls from Strangers" at the age of 16. She is now signed to Red Moon Empire, as well as working on a new sound that infuses Happy Hardcore with psychedelic music and Breaks.

When cited for musical influences behind her more experimental sounds, she has stated that her parents raised her on the sounds she became inspired by, being introduced to Coldwave, as well as experimental music by her father, and Goth, EBM, and futurepop by her mother. Her inspirations include artists such as Government Alpha, Skinny Puppy, Ministry, The Cure, Siouxsie and the Banshees, The Bauhaus, VNV Nation, Shpongle, and Apoptygma Berzerk.

Oavatos began DJ'ing roughly around the same point she began to produce, starting with a copy of Virtual DJ she acquired from recommendation. She began as a trance DJ and soon realized that trance music was not fast enough for her, eventually moving up to Hardcore. She has since began as a Happy Hardcore DJ, spinning now at 185 BPM. She began increasing the speed she DJ'd at soon after meeting a local DJ named Kid Nickles, who would later become her Co-DJ and mentor for a duration between march and november of 2009. She would later break off from Nik due to personal issues between both DJ's. She now DJ's solo.

Soundfonts: To many to count. Less often used in newer works