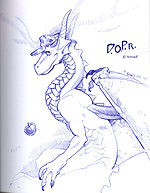 D.O.P.R is the acronymic name of a scalie artist within the furry community. His artwork can be seen on Fur Affinity (as DOPR5) and at Herpy Reference Archive where he is listed as the "unofficial" official artist.

He first appeared online in the forums for the furry webcomic Jack, although he was online elsewhere long before then.

His fursona is a green and yellow Western Style dragon which he refers to as a "Draco Rex Cristatus"; the Common (also referred to as the 'Greater') Earth Dragon.

Before taking on the dragon form, he briefly considered a Utahraptor, images of which can be seen on his Fur Affinity site. His reasons for choosing the dragon form over the 'raptor form are not known.

D.O.P.R's preferred subject is dinosaurs and the majority of his work is of or relating to this species. He also is fond of dragons, which is in keeping with his scalie persona.

He seldom takes commissions, but does gift art for those around him, particularly other artists who he feels have "inspired or motivated" him.

His webcomic RapRex has been under development since 2004; several pages of the comic as well as the front cover have been released on various websites.

In person D.O.P.R. is hardly ever seen without his cap. This cap (a U.S. military standard issue summer-weather cap) has become something of a trademark among those who know him.

In his own words, he began wearing the cap as a child, when one was given to him by a neighbor who had returned from the Vietnam war. Since that time he has worn a similar cap almost constantly through his lifetime. The largest interruption to this habit was after his discharge from the military. Adorning the cap is the brass insignia for the 7th Cavalry, A Company. This token was given to him by his best friend while they were visiting Tombstone, AZ.

D.O.P.R. joined the Arizona Army National Guard in 1999 and served until approximately 2002. He entered the communications branch and was stationed in Marana, Arizona.

Shortly before September 11, 2001, he was improperly diagnosed with a medical condition, and discharged.

D.O.P.R is known to own three cats - two males and a female. The oldest cat is a male maine coon named 'Gil-Galad' (Gilly) named after an Elven king from Tolkien's 'The Lord of the Rings'.

The youngest is a male American Tomcat (?) named Isildur (Izzy) after another Tolkien character. The last is a female Burmese-mix named Khan (in reference to the 'Star Trek' villain).

RapRex is an upcoming adult webcomic by the furry artist D.O.P.R. Several previews of the comic, including unused pages and watermarked samples of the front cover, have been posted to sites such as Fchan, The Herpy Reference Archive and Fur Affinity. As of early February 2009, the comic is in it's fourth and final chapter. A release date has not been announced.

The comic features a male-female pair of Tyrannosaurs and Utahraptors, a female Edmontosaur and a male Struthiomimid involved in various sexual activities.

Although he had previously intentioned for the comic to be released as an online webcomic, D.O.P.R has since announced an interest in releasing the full series as a traditional comic through publication, although no date or other information is known.