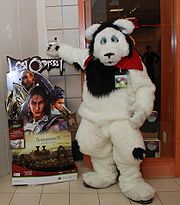 D.L. Leonine (known as DL or Leo) is a fursuiter from Rocky Mount, North Carolina, U.S.A.

Leo is a white lion. He is the alter ego of his creator, and started out as the main character of a webcomic. The comic ran from 2005-2008 and centered around Leo's real life experiences working on a help desk. The fursuit of Leo was built by Wally Wolf. A partial version was done in 2007, with the full version completed in early 2008.

Leo is a crossover character, known locally in both the furry fandom and the anime fandom. Most local fandom activity in Leo's area is anime-based (including his home con, Animazement). As Leo was inspired, to some degree, by the Kimba series, at these events, he cosplays as Jungle Emperor Leo.