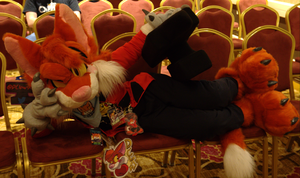 Clawy, also known as D-Claw or Taijey (b. September 2, 1994),[1] is a furry artist, fursuiter, and cosplayer from Mesquite, Texas, U.S.A. Her fursona is an orange house cat, a toon that is seldom seen without an anvil.

Her fursuit was constructed by More Fur Less and debuted at Texas Furry Fiesta 2016.

As Taijey, she runs her own business, Tai Toon Studios.

While Clawy is her primary fursona, she has an alternate form of her fursona and nine characters.