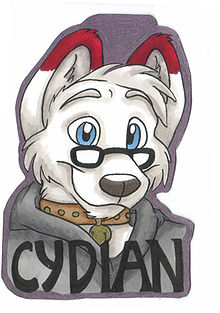 Cydian (also referred to as Cyd) is a name that refers to two similar ideas. One is a character roleplayed on MUCKs such as Tapestries, while the other is the personal fursona of the player. While similar in appearance and personality, the two differ in background.

Cydian, in all his incarnations, is a wolf of the species canis lupus. He is completely white, save for his two distinguishing features: the tips of his ears, which are red, and his two tails. The tips of these are also red. In his fursona incarnation, his headfur is generally long and shaggy and of varying colors depending on the player's mood. In his "character" incarnations, his headfur is generally short, but there have been occaisons where the two styles are mixed. 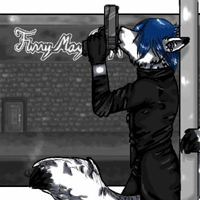 The "character" version of Cydian"

The backstory of Cydian the character varies, depending on what version of him is being roleplayed. But each version shares the same base similarities, aside from looks.

Cydian is a member of a powerful clan who have ruled the Empire since it's foundation a millenia ago. He is a Godlike One, one of a few such children born every few generations who are the reincarnation of the clan's progenitor, Miyakami. They are blessed with all of the abilities of Miyakami, and always cursed with the insanity that all that power brings. The history of the Godlike Ones are intertwined with the clan as a saga of sadness, death, and destruction. Godlike Ones in the past have been responsible for the genocide of entire races, or the destructions of entire planets before their powers engulfed them.

Cydian, however, is born free of the madness that plagues his line, and due to his sanity, is wanted by the clan's Patriarch, Ulifen. Ulifen wants to use Cydian's powers to break the barrier surrounding the Whole that kept the Empire within it's small corner of the galaxy, and spread the clan's dominance throughout all of the known universe.

Throughout his life, he is constantly bereft of any figures that show him love for very long. In a series of adventures in which his powers slowly develop, he grows and matures both physically and morally.

At the age of 21, he encounters Balisar von Treyan, commander of a secret paramilitary force known as Balyan openly opposed to Ulifen and leads them in a successful campaign, weakening Imperial power. When the Balyan forces are defeated in a disastrous battle over Cedera, Cydian flees to the planet of Nexus where he meets Darkwind.

The two would fall in love, and builds a family. Cydian spends two years there, blissfully happy, and unwilling to fight anymore, until the clan attempted an invasion, intent on getting Nexus which contained the only other way out of the Whole.

Cydian realizes that with his heritage and abilities, he cannot sit on the sidelines in the conflict. After a stunning campaign that beats the Imperial Starfleet back to the very capital of the Empire, Ulifen, lost to insanity, releases Qa'Tar, an ancient demon that existed before the modern conception of time and has deeper links to both Cydian and Darkwind than can be imagined.

All of this forms Cydian into a battle-hardened warrior, but he is also compassionate and kind. He refuses to harm innocents, and would sooner die than kill someone who does not deserve death. His enemies, however, receive no mercy and are hunted down and destroyed without pity. 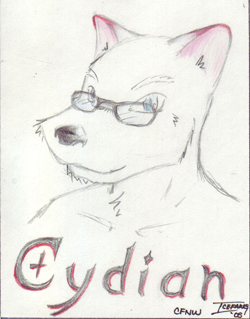 The "fursona" version of Cydian

Cydian is also the personal fursona and the name the player uses to refer to himself. The fursona version is very physically similar to the character version, although, thinner, younger and less muscular like his player.

Cydian is very much a stereotypical "geek", with an extensive interest in video games, television, and anime. He was born in 1985, and has been a lifelong student of history. When his peers were reading Goosebumps, he was devouring his father's old history textbooks. His favorite eras in history are Rome from the Punic Wars to Augustus, and World War II. He is incredibly fond of military tactics, and can be found playing deep strategy games such as Hearts of Iron 2 or Rome: Total War. He is also interested in learning about history from other viewpoints than what are taught in schools. His current interest is learning about World War II from the perspective of Germany.

He is a writer.