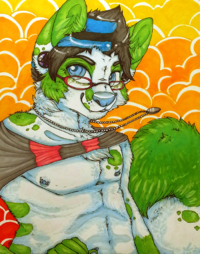 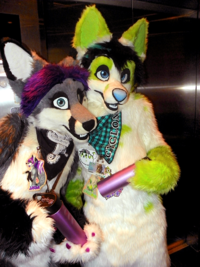 Cyclone Fusky (born September 5, 1991) is a fursuiter who lives in Philadelphia, Pennsylvania, U.S.A.[1] As of August 15, 2012, he is in a committed relationship, and living together, with Jaga Grey Fox.

Cyclone's fursona, which was was designed by Jaga Grey Fox, is a fusky (a hybrid of Arctic Marble Fox and Husky). He stands at 5'11" and weighs 145lbs. His fur is white with green markings, like an Arctic Marble Fox. He has teal eyes and black hair with teal stripes in it. His tail is 2' long.

Cyclone first appeared at Fur Affinity: United in 2011. He has also attended Furry Weekend Atlanta 2012 and 2013, Furstivus, a handful of the Furst State meets, the New Years Furry Ball, Doodah Parade, and the NJ FURBQs.

Cyclone was born in Pennsylvania. He moved over twenty times during his highschool years, and struggled with a rough family situation. Cyclone has spent most of his life working and one day, by chance, fell upon the furry fandom when looking for an out from his rough life.