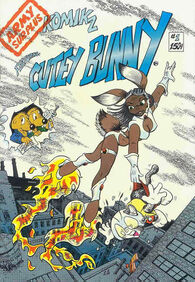 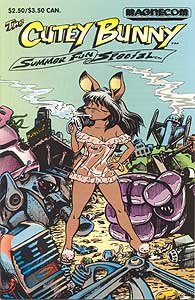 Cutey Bunny, also known as Cutie Bunnie and QT Bunny, is a furry superheroine bunny from a humorous line of underground comics created by artist Joshua Quagmire. She first appeared in Army Surplus Komikz in 1982 and has since appeared in other titles such as Critters.

Kelly is drawn as a shapely anthropomorphic bunny, often dressed in something fairly revealing, as befits Quagmire's sense of burlesque. Superhero Multiverse describes her as "the world's first African-American rabbit superheroine".[1] She sometimes wears her hair in cornrows. She is very bright, athletic, friendly, and clean-cut, usually uttering no oaths stronger than "Gosh-a-rootie!"

Cutey's powers derive from her amulet, a gift from Ra, the ancient Egyptian god of the sun. (Ra is an occasional guest star in the comic; much is made about his befuddlement with modern-day technology, such as toasters and electric coffeepots.) The amulet allows Kelly to change instantly into any one of about six different costumes, and gain the powers associated with each; for example, as "Rocket Bunny", she can fly with the aid of rocket-powered boots, and as "Samurai Bunny", she wears chainmail armor and can wield a katana to deadly effect.

Cutey Bunny is the only furry rabbit character to make it on 24/7 Wall St.'s 39 Most Famous Bunnies of All Time.[2]

Cutey Bunny should not be confused with her British counterpart and occasional co-star, Cutie Bunny, whose secret identity is Heather ap-Glendower (or -Glendowner), and who has no special powers beyond great athleticism. Heather has more Caucasian features and blonde hair.

Cutie was introduced by Quagmire as a parody of the Earth-Two story concept once employed by DC Comics to explain the history of their Golden Age superheroes.