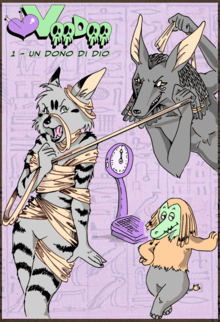 The cover of the first Cuore Voodoo episode

Cuore Voodoo is Sans Souci's new comic, published in two languages (Italian and English) starting from 06 December 2008. It's the first time that Sans Souci appears as the protagonist of a comic, her creator used to draw her in single images only.

Cuore Voodoo means 'Voodoo Heart', and is a silly comedy about an 'Occult agency' lead by a spotted hyena named Brigitta Samedi, and her 'right arm', the striped hyena Sans Souci, specialized in threating those things that usually makes people knock on wood.

The first episode is titled 'A God's gift' and see Sans trying to help the God Anubis, accidentally teleported in the XXI century after a fight with his fiancèe.

The comic is drawn in black and white and is updated once/twice every week.