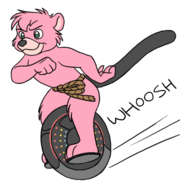 Cubbi (born February 18, 1976) is a furry originally from Moscow, Russia; who as of 2002 lives on Long Island, New York. His primary fursona is a pink bear cub.

Cubbi first appeared online on IRC and FDCMuck in 1995.[1] He is Cubbi Bearcat on Second Life.[2]

While in Moscow, he helped organize the Russian furry community, by creating and maintaining the FidoNet Echoconference fido7.ru.toon where the first Russian furries found each other in the 1990's, and by being one of the founders of the first RusFurrences. Cubbi currently resides on Long Island and attends Anthrocon, Furpocalypse, Motor City Furry Con, and New Year's Furry Ball. He is an active participant in the Long Island Furs community and has co-organized the annual LIFurs OMGWTFBBQ every year since 2008.

His primary fursona, Cubbi, is an eight year old pink bear cub, originally based on the character of the same name from Disney's Adventures of the Gummi Bears. He spent a lot of time with other furries and became a furry himself, Cubbi's in-character fursona is a wild black panther. He often meows and can usually be seen wearing a tied-on fake black panther tail. Cubbi is not a babyfur, he loves independence and hates being babied. He dreams of living with wild animals, like Mowgli.

Outside furry fandom, Cubbi holds a Ph.D. in organic chemistry and works as a software engineer.