Crusader Cat in his fursuit at Anthrocon 2009 with Kevin Burkhardt. 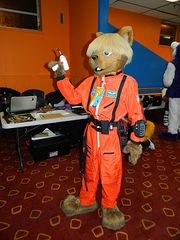 Crusader Cat at the Delaware Furbowl

Crusader Cat is a fursuiter, writer, actor, who lives in Alabama, USA, and was briefly a furry raider and altfurry.

Crusader Cat was an Independent Baptist, advocating King James only movement, and was criticial C.S. Lewis' Chronicles of Narnia, and Christian rock. He is a published playwright, musical theatre actor, and bagpiper.

Crusader Cat was introduced to the furry fandom when he was seventeen, after discovering furry pornography. As a result, he became fiercely anti-furry, believing it was some sort of bestiality cult. At the age of twenty, after discovering and contacting other Christian furries, he learned of the diversity of the fandom and later concluded that being a furry didn't contradict his Christian beliefs.

On March 20, 2008, he decided that becoming a furry could help him deal with some of his issues regarding sexuality, while at the same time providing an opportunity to promote his beliefs. At Anthrocon 2008 he experimented with this by creating anthropomorphic Jack Chick style tracts, which he distributed at the convention. He has since renounced his religious affiliation.

Crusader Cat's fursona is a brown house cat with a blond salad-bowl haircut and is most commonly depicted wearing a medieval knight outfit or orange NASA inspired jumpsuit.

In 2009, Crusader Cat was banned from Fur Affinity after threatening legal action against the site, under the belief that the FA staff were not taking his harassment issues regarding several users[who?] seriously,[citation needed] or were ignoring these trouble tickets outright due to his religious beliefs.[citation needed].