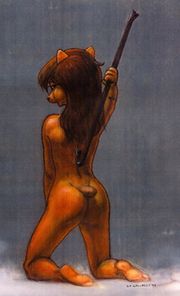 Erma Felna and the perennial crowbar. Art by Steven Gallacci

One of the long-running inside jokes of furry fandom is that of drawing a female furry character, naked with a crowbar, which is 1920's slang for a penis. [1]

The origins of the joke are said to be a convention sometime in the 1980s. As the story goes, someone asked Steve Gallacci to draw a picture of Erma Felna naked. He declined, but Jim Groat who was nearby and overheard the conversation, asked again in a whiny fanboy voice to draw her naked, and with a crowbar.[2]

Since then, it has become something of a cliché/running joke that any artist in the furry fandom will at some point produce a picture of a female naked with a crowbar, or that any sufficiently well-known female character will be drawn naked with a crowbar (one recent LiveJournal discussion mentioned Florence Ambrose).[citation needed]

Some artists have done one or more pictures specifically to pay homage to the joke. It has been parodied in a few stories, including Sabrina Online: The Story, and was referenced in the NES game Nightshade, which was written by Paul Kidd. [3]

On July 25, 2000, artist Brian O'Connell suggested in alt.fan.furry the creation of the Titanium Crowbar Awards for best furry erotica in the fandom.[4] This came out of a discussion involving "crowbar" jokes, posted earlier on the group, involving the device, Gallaci's character, and sex.

Even though he wrote a ballot post on August of that same year on AFF, with category nominations, nothing came out of it, and the idea was shelved.[5]