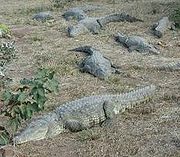 Crocodiles
The crocodile, referring primarily to certain members of the taxonomic family Crocodilidae, is among the world's largest reptiles and a carnivore. Fossil evidence places crocodiles contemporary with the dinosaurs, and they are certainly well-known throughout human history.

As a group, crocodiles also include the alligators, caimans, and gavials, but the reptile referred to specifically by the name crocodile is distinguished primarily by body size and the shape of its snout, which is sharper than that of the alligator but broader than that of the gavial. (One mnemonic method for distinguishing the alligator from the crocodile is that the alligator's snout is C-shaped and the crocodile's is A-shaped.) Crocodiles are native to warm, marshy areas in the Middle East and South Asia, although they have been imported abroad to zoos as well as "crocodile farms" which are well-known for the sport of crocodile wrestling in places such as Thailand and Australia.

Crocodiles have a rather unpublicized ability to belch, which some have supposed could account for the origins of the legendary fire-breathing dragons.

Based on the description of the Leviathan, mentioned in Job chapter 41, some scholars believe it is a reference to some kind of crocodile.

One of the best-known crocodiles in literature, the Mugger of Mugger-Ghaut, who appeared in the story The Undertakers from the Second Jungle Book by Rudyard Kipling, was unfortunately an old villain whose pride and inability to change with the times brought him to a poetic death at the hand of a man whom he had failed to kill as a boy.

Another famous crocodile is from Peter Pan who was the one responsible for Captain Hook's missing hand and remained in constant pursuit for the rest of the pirate. The crocodile was known for swallowing a lot of other things, including an alarm clock, whose ticking was the only thing that warned Hook of the croc's impending approach. This was responsible for many of Pan's narrow escapes.

Crocodiles are rather difficult to find as characters, because of their confusion or association with the related alligators, but they tend to be villains, such as Croc from Disney's Wuzzles TV series.

A couple of known contemporary crocodile characters are Carnival and Drcroc.