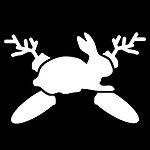 Crimson Furquisition are a band of 8 furs that can be found on Second Life and conventions as a pirate crew. The group is international, and does not have any fixed location headquarters. Actual pillaging and plundering is nominated, with a 30% or more 'for' vote resulting in a display of comical piracy with full use of stereotypical pirate lingo.

"Created near the end of 2006 amidst the waves in an empty sea of boredom, the captain has vowed to take Midwest FurFest by storm; pillaging the non-furs, taking the parade by storm and claiming the new land for all fur kind."

Crimson Furquisition began as a simple joke between a few of the members before growing into a band of merry pirates with a mission. The founding member of Crimson Furquisition was and to some extent still is a sailor. All members have a very strong interest into piracy and its history as well as various fursonas. After witnessing countless videos and photographs from several furcons, a late night conversation with a friend brought up the question of attending at least one convention in 2007. A few days later, it was decided that they would all be planning on making their premiere appearance at MFF 07.

The flag that many of the members fly has not been around very long but has since become recognized within places in Second Life and to the outside world as well. It was created by Warren Dwi as a compliment to an avatar within SL, and has since been in widespread use by both the creator and members in the outside world.

Each of the crew members bear their own fursonas based on themselves with just a little of 'pirate' charm.

Warren Dwi is the captain of the crew and is a sometimes fearless, confused and fierce Welsh pirate; born into a life of piracy and plundering. Infamous on a near global level for fire related 'mishaps'; the most notable resulting in vast quantities of removed hair. The captain has also been responsible for the creation of The Brown Paw and inciting fashion trends using cannon-hats and ribbons.

Crimson Furquisition have a special trickster in their midst known only as the Messiah. A person with great talents, witnessed in 2006 walking on water. Soon after this event, a plan was hatched based around this fact. Without a ship the crew were stuck in drydock without a hope in hell of looting anything across the pond. With the aid of the Messiah they have constructed an interesting yet perfectly valid method of travel, albeit slightly dangerous and completely frowned upon by the authorities. The general public (when not being pillaged, plundered or loots for wares, carrots or other vegetables) are quite amused at seeing a collection of flying pirate furs in formation head standing yelling out various phrases not restricted to "We be after all y'er vegetables! ... and loot!".

A small number of members also have a personal mission that has rubbed off much like their flag has amongst various people and communities. It is understood to be a private opportunist mission to commission or request a recording from Sir Thomas Sean Connery pronouncing the word "Biscuit" or "Biscuits" in which they believe will roughly sound like "Bish-Kit-shh". As a result the word itself has become more or a trademark 'shout out' during pillages.

Notably, there is a spoken agreement between participating members that whoever is first to manage this without cheating will automatically become Captain. Bonus points are also awarded to the new Captain if Sean Connery is recruited legitimately as a member of the crew shortly after the recording.

Crimson Furquisition do not claim to be first to coin the word Bishkitsh, as its use is predated in an October 2006 forum post, here. The manner in which the word is referenced within the post however is unknown.

As a general rule of thumb the group will talk like pirates where and when required, without waiting for September 19th each year. Many of the members will hold conversations this way, but it is not a requirement of the group to be fluent in Pirate.