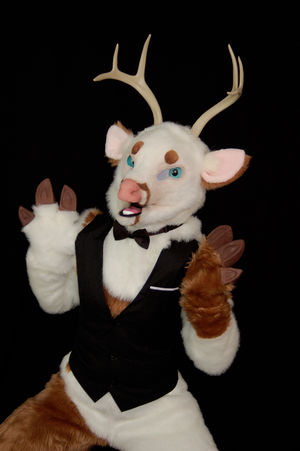 Cricket Whitetail (IPA: /ˈkɹɪk.ɪt/) (born 1995) also known as Sky, Deer or Sandi, is a member of the furry artist and fursuiter who lives in Florida.

Sky was introduced to the furry fandom gradually through multiple outlets, beginning in 2007. The talking cats of the Warriors novels, and the furry community of Youtube influenced this twelve-year-old artist to begin dreaming up his own four-legged characters. Other influences included Neopets, Redwall, and a family that supported imagination. Sky continued to delve deeper into the furry community, eventually taking requests and commissions to draw feral and anthropomorphic artwork for the community. Sky was represented from 2008-2014 by a hybrid fox-rabbit that was given the name Sandi, after which the alias stuck. At the end of 2014, Sky developed Cricket Whitetail, the current deer fursona that represents him presently. 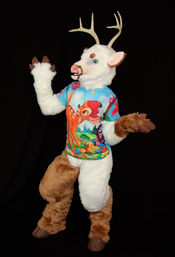 Cricket wearing a shirt of his idol. Photo credit to Wyspurr

Sky (Born August 29, 1995) has a Bachelor's degree in Psychology. On the side of his part-time work, Sky completes art commissions via FurAffinity to earn money to spend on fandom-related activities such as conventions. He enjoys spending his free time playing video games, creating artwork and sculpture, and learning languages. While Sandi (the rabbit-fox character) is female, and Cricket is male, Sky identifies as gender non-binary and does not prefer any pronouns in particular. Prior to this identification, the artist felt uncomfortable with being forced to conform to the binary gender standards imposed by society. Furthemore, Sky openly identifies as asexual and panromantic. He has been in a devoted relationship with a non-furry individual since May of 2013. 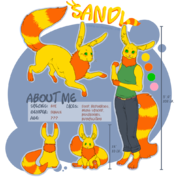 Reference sheet of Sandi the Rox

Cricket Whitetail was created in 2014, when Sky decided that Sandi was no longer an accurate representation of himself. Cricket's original name was Pie, due to the fact that he is piebald. As a character, he has been described as a cartoon embodiment of Sky's dominance complex. When performing in fursuit, it is not uncommon for Cricket to find objects to stand on so as to appear taller, and to request piggyback rides from his friends. Cricket was the first fursuit partial that Sky built, and was worn actively from June 2015 - June 2016. Sky currently performs in a fursuit of Cricket that was build by Komickrazi Studios in June 2016.

Sandi was imagined in 2008 as Sky's first fursona. She is a hybrid fox and rabbit, which Sky took to calling a Rox. Her design changed very little over her six-year period as Sky's active representative character. Originally, Sandi's design had three orange stripes on her back, and stripes around her ankles. These details were eventually dropped entirely, because of Sky's forgetfulness of drawing the markings at all. Personality-wise, Sandi represented a much younger version of Sky. She is a very bubbly and unpredictably random character. Sandi's hybrid creation was explained through being made in a test-tube by a mad scientist. Canonically, Sandi is a weapon of mass-destruction, but she nor anyone else has ever been able to activate those powers from within her. While this origin story is terribly unoriginal, it is important to keep in mind that it came from the imagination of a twelve-year-old. Sky now sees Sandi as an embodiment of his childhood, and continues to feel connected to the character.

Bernard is a Red Wolf, whose design was purchased from Kitten in 2012. Bernard is the only character not created by Sky that he personally identifies with as a fursona.