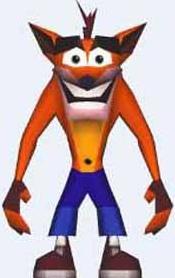 Crash Bandicoot is a video game character in a successful series of 3D video games.

Crash Bandicoot is an anthropomorphic bandicoot who wears a pair of jeans and sneakers and has green eyes. He was at first an ordinary Eastern Barred Bandicoot, but his arch-nemesis, Dr. Neo Cortex, turned him into an anthropomorphic bandicoot as part of world domination. Due to a malfunction in the Cortex Vortex, a machine used to brainwash the mutated animals, Crash broke free and escaped through a window in Cortex Castle. He landed in the ocean, and washed up on the Wumpa Islands sometime later. Since then, Crash has had to stop Cortex multiple times. His sister is a smarter bandicoot named Coco. Crash lives on the Wumpa Islands with his sister, Coco, his friend, Crunch, also a bandicoot, who was created by Cortex to stop Crash, and Aku Aku, who is a fatherly figure of the three bandicoots and Crash's sidekick. Crash likes to sleep and dance, and his favorite food is an apple-like fruit called Wumpa fruit. He does not speak much, but his style of talking consists of gibberish, which the other characters can understand, and simple words like "Coco" and "Pancakes", and he says "Whoa!" in the games when he dies.

Sketches of Willy Wombat, an early version of Crash Bandicoot

Crash was thought up in August 1994. His original name was Willy Wombat, and he was originally a more bulkier-looking character. During the development of the very first game, Naughty Dog decided to keep it a secret, but Sony demanded that they see it, so an alpha version, and later, a beta version of the Crash Bandicoot game was released. In Spring 1995, some sketches of Willy Wombat were drawn. When the game was finally released, he was renamed Crash because of his tendency to break crates.

Crash in other games[edit]

Crash Bandicoot and Spyro the Dragon
Retrieved from "https://en.wikifur.com/w/index.php?title=Crash_Bandicoot&oldid=542842"
Categories: