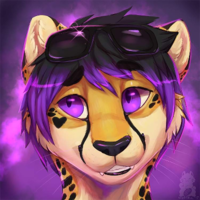 Cooper The Cheetah, as drawn by Nubtail. 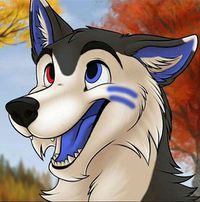 Apache The Husky, as drawn by Star-Gazer.

Cooper The Cheetah (or simply Cooper, formerly known as Apache The Husky; born February 11, 2000)[1][2] is a furry and Furry Amino curator who lives in England, United Kingdom.[1]

Cooper's main fursona is a male king cheetah[3] who stands at 6' 1" tall. He has golden-yellow fur with black spots, black stripes running down his back and yellowish white countershading. Cooper's hair is black with purple highlights and his eyes are purple, similar to the color of his highlights.

Cooper's secondary fursona is a male Siberian husky named Apache The Husky.[4] He stands at at 6' 1" tall with dark gray fur, with white forearms, lower legs and countershading. The white and dark grey fur is separated by thin lines of blue fur. Apache has heterochromia iridum, with his left eye being blue and his right eye being red.