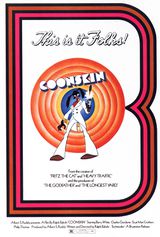 Coonskin is a film from 1975 that blends live action with animation, directed and written by Ralph Bakshi. It is about an African American group which has a rabbit, a fox, and a bear that get to the top of a criminal organization in Harlem and they go against corrupt police officers, swindlers, and the Mafia.

Coonskin makes reference to many elements of the African American culture of its time, going from traditional African tales to the work of the artist George Herriman (Krazy Kat), and satirizes racist stereotypes such as the blaxploitation genre and movies like Song of the South and The Godfather.

Originally produced under titles such as Harlem Nights and Coonskin No More..., Coonskin was subject to controversy before its premiere when the Congress of Racial Equality (CORE) criticized its content as racist. When the movie was premiered, the Bryanston Distributing Company gave it a limited showing.

At first, it received negative reviews. Later on, it was given another showing with titles such as Bustin' Out and Street Fight. Over time, Coonskin has been re-evaluated. A New York Times review hailed Coonskin as Ralph Bakshi's masterpiece. Bakshi has stated he considers it his best movie.