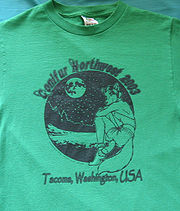 A convention shirt is one produced especially for a convention. This is a time-honoured tradition carried over from science-fiction conventions.

The artwork is usually by a guest of honor of the event, or is sometimes chosen by popular vote, as was the case with Mephit Furmeet, which up until 2014, had an annual contest for the design.

Generally, convention shirts are available in one color for attendees of the convention, and another for convention staff; for example, Megaplex 5's shirts were black, except for staff shirts, which were forest green.

There may also be variations; for example, the Conifur Northwest 2003 shirt was printed with a black design on green, but a white on black shirt was available directly from the artist, Grrrwolf.