ConFurence: The International Anthropomorphic Convention / Exposition was the first and, up until Eurofurence 16 held in September 2010, the longest running annual furry convention in existence. Initially headed up by two SoCal furs, Mark Merlino (convention chairman) and Rod O'Riley (programming), control was transferred to Darrel Exline after ConFurence 10. Starting in 1989 as a test-run called "ConFurence 0", it was usually held at the end of January in various venues around southern California, particularly in Orange County where it was cheaper to book hotel space at that time of year.

ConFurence ran for a further fourteen years, reaching its zenith in 1998 (ConFurence 9) with over 1200 attendees. Attendance dropped sharply after this, due in varying parts to a schedule change, a change of venue (100 miles from the main Southern California population centers), competition from Further Confusion and other Furry cons, and the dot-com bust. It ended with ConFurence 2003 and was succeeded by Califur in 2004.

The convention started as an offshoot of the traditional Sci-Fi / Fantasy / Anime model which would include a hotel at reduced group rates, a furry-specific programming track located in the general event areas of the hotel, and followed with social gatherings and room parties in the evening.

With the rise of ever-more-popular furry parties occurring at various other conventions both in the Bay Area and SoCal, at one point, Rod had the idea of "Let's put on a show." Plans for the fandom's very first own convention then began.

Dr Pepper, a non furry, but a supportive fan, coined the name. True, it wasn't a big deal, just a simple sentence: "Hey Mark, about that new convention you're thinking of, how about calling it 'Confurence'?"[citation needed] But hey, someone had to.

With the success of the first test con, plans were put into effect for an actual, organized furry gathering the following year. ConFurence was born. 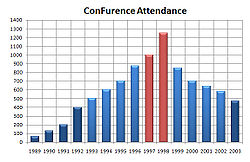 The first event was attended by 65 people, and over the years, gradually grew in attendance until its largest attendance in 1998 at ConFurence 9, in Buena Park with over 1200 registered for the 4-day event.

Programming at a typical con consisted of several tracks which ran simultaneously in different event rooms within the hotel. There would be a main stage/auditorium which would easily seat a few hundred people, which would be the stage for special guests, art auctions, pet auctions, fursuit contests, and the Cabaret Fur Le Dance being prime examples of main events. Also, the room would double for nightly social dances, such as the Fursuit Dance, and the ever-popular Purple Nurple Live.

There was a ConFurence Filk Contest every year.[1]

As the furry fandom rapidly increased in fans, and with the rise of furry-specific MU*s, convention attendance rose sharply over the following years. For many, ConFurence would mark their first experience at convention-going.

By ConFurence 8, the general attitude toward ConFurence was that it was a "wild party" and that things getting out of control at times. Rumors flew around, depending on who said them and who believed them, of strange and funky occurrences amongst guests[citation needed]. This ranged from two reports of semen found in elevators[2][3], guests running about in revealing clothing (one report involved an attendee wearing a Dixie cups in a lewd manner, though Gary Burke attempted to debunk the report that it was actually a Dixie cup [4]), wild room parties where increasingly unthinkable acts were occurring[citation needed], and an increasingly offbeat programming track[citation needed], including a live "slave" auction, later renamed the pet auction: a re-creation of a pastime on several MUCKs such as FurryMUCK and Tapestries.[citation needed]

Other accusations include the owners' alleged attempts at increasing con attendance by offering "Free memberships to FurryMUCK members". [citation needed] Mark's own words on the subject put a bit of perspective on the issue: "That would be totally stupid! It wouldn't be a practical business move. And yes, ConFurence was a business. I would lose money. Plus, how on earth would I know if it's really them? It's absurd!" [citation needed]

The FurryMUCK rumor was likely started due to a misunderstanding the special badges for online personas that were given out at Confurence 3. As noted in the ConFurence Progress Report #3 in the January 1992 issue of In-Fur-Nation: "FurryMUCK participants (And other virtual/network personalities): Be sure to pick up your 'Hi, I'm Virtually _____' badges at Registration -- If you're daring :>" [5]

During the final staff meeting, Mark Merlino made the announcement that after CF10, he would be stepping down as convention chairman. Nominations and a staff-wide vote was cast. Darrel Exline was voted in as the new head of the convention starting post-CF10. The rights to the ConFurence name were transferred from Mark to Darrel for US$1. The rights and merchandise for cons 1-10 remained Mark's property, while the name "ConFurence" and all future events after 4 April 1999 became the sole property of Darrel.

Darrel changed the administrative make-up of the convention, creating an umbrella company called ConFurence Group which would be the overall entity in control of several subgroups and events: ConFurence, CritterConDiego, and ZonieCon.

A change of venue to the Burbank Hilton was announced. All three subsequent ConFurences were held there. The numbering of the conventions was altered to follow the trend set by other entities to a yearly indicator. ConFurence 13 became ConFurence 2002, and similarly for the one following in 2003. 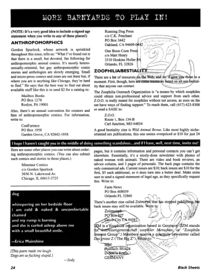 Mention of ConFurence in alternative sexuality 'zine Black Sheets #10, "Bestiality and Glamour" sparked claims that CF ran an ad in a fetish magazine.

Depending who you ask, what happened next to the convention is up for debate. Convention attendance continued to decline. Many debate as to the reasons why this occurred; among the debated factors were:

Two types of people regularly complained about ConFurence. Half complained it was too wild; the other half complained it wasn't wild enough. When Darrel Exline accepted the duties of con chair in 1999, he admitted he considered himself a Burned Fur [6], and Burned Fur member Hangdog began spreading the rumor that Burned Fur was "running" Confurence[7]. When furry lifestylers started expressing reservations about attending Confurence and deciding not to attend, Burned Fur member Mitch Marmel remarked that Confurence was "surviving and thriving without them."[8] ConFurence eventually gained a stigma as "Burnedfurence" and never recovered. Darrel Exline did not declare he wasn't a Burned Fur until 2001[9].

Although the entire staff of Confurence pre-Darrel practically remained the same, with the exception of a few new staff who came in from LASFS, the idea that the convention lost members due to Darrel's political and social affiliations remains a possibility.

Date and venue of the con[edit]

During ConFurence 9, Rod O'Riley announced that the convention would be changing its venue to San Diego, and the date would be changing from late January to mid-April. It was at this point that Mitra, Whitefire and others immediately began to plan a convention that would be more convenient to the Bay Area, since San Diego was distant for the majority of Californian furs to travel. This became Further Confusion.

The change of CF's date was also a shock, as many had planned their schedules according to the January pattern. Additional bad timing came from the fact that ConFurence 10 happened on Easter weekend, which many complained would make it impossible for them to travel. Later ConFuerences did not occur on the holiday weekend, but attendance continued to decline. FC was a major contributing factor: they scheduled themselves in ConFurence's old January timeslot, giving the northern Californian attendees a local con that fit many people's schedules.

In the following years, moving ConFurence north to Irvine and Burbank did nothing to improve registration. Many said that with the dropping attendance, the Burbank Hilton began to look like a "Ghost Town". The hotel had a full-fledged convention center adjacent to the main tower large enough handle 1000+ attendees; many people complained that the large venue made the convention seem even smaller than it was, and that running into friends and acquaintances was made more difficult in the huge space. While the actual attendance did not drop all that sharply, the venue itself made it seem that way.

The price of the convention steadily rose, and those only wanting partial or single-day memberships were met with lessened amenities and still higher prices. The idea of trying to push people into getting a full membership failed as those casual attendees who knew they would not be able to attend all 4 days would be spending much more money for a 2-day (weekend) registration. Some resorted to simply hanging out in the lobby and at room parties in people's personal hotel rooms, rather than pay for the rising price of a shrinking convention and programming track. The collapse of the economic dot-com bubble in California may also have been a factor.

Following ConFurence 9, the next two years witnessed a sharp increase in the number of furry fans finding out about the fandom and gave to a rise of regional Furry Conventions nation-wide. Conifur Northwest, Mephit Furmeet, Furry Spring Break, Feral!, and ZonieCon (to name just a few) suddenly sprung up, and the need for furs to travel cross-country diminished.

Whatever the case, Darrel announced that ConFurence 2003 (14) would be the final ConFurence, and that the name and event, while still remaining his sole property, would cease to exist and operate. In the program book, Darrel explained some of his motivations for keeping the convention alive, admitting to mistakes and things he could have done better[10]. Debates about his chairmanship continued after the end of the ConFurence, pointing out he had allowed television crews to attend during the final year[11].

The demise of ConFurence led to the almost instantaneous rise of Califur, with a similar staff to ConFurence, to be held the following year.