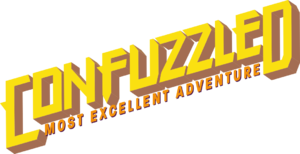 ConFuzzled 2017 was the tenth iteration of the ConFuzzled convention. It was held over 26-30 May, 2017, at the Hilton Metropole in Birmingham, England.

The theme of the convention was "Most Excellent Adventure" (celebrating ten Years of ConFuzzled) and the guests of honour were Volf and Shay.[1]

Latest figures now including direct donations to the charity, the Badger Trust, put the total raised at £21,113.36.[2]

Full pricing details and the opening date of registration was confirmed with a blog post on September 21, 2016.[3] Registration options for 2017 were the same as in previous years, with attending-only and residential tickets, both of which could be upgraded with "Plus" and "Sponsor" options for an extra £15 or £50 respectively.

The basic "attending only" ticket remained at £80. The basic residential ticket cost varied between £270 and £380 per person depending on the room type, and included breakfast and access to the hotel gym and pool. All of the rates were offered with a £10 early-bird discount until January 9, 2017.[4]

On March 16, 2017, it was announced that the convention had sold out of rooms at the main hotel, but that talks were in progress to expand the available room block.[6] Shortly after on March 29, 2017, a further announcement was made confirming the Crowne Plaza Hotel, NEC as the official overflow hotel with pricing remaining the same across both venues.[7]

On April 13, 2017, it was announced that both hotels had sold out and residential registration was closing four days earlier than expected.[8]

Registration closed fully at 1900BST on May 7, 2017, and the final attendee statistics showed a total of 1645 attendees had registered from 34 different countries.[9]

On March 28, 2017, it was announced that the International Snack Exchange would be returning to the convention.[10]

On April 5th, 2017, it was announced that the convention would be providing funfair rides free of charge to all attendees for the convention's 10th year celebration.[11]