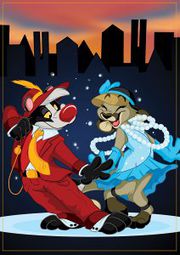 ConFuzzled 2011 was the fourth rendition of the British convention ConFuzzled, taking place from May 6 to May 9, 2011, at the Britannia Country House Hotel in Didsbury, UK. The theme was the 1920s Mafia - "The Roaring Twenties"[1] - and the guest of honor was John "The Gneech" Robey.

ConFuzzled 2011 reached a record attendance of 499 people, making it the second largest furry convention outside of the United States (after Eurofurence) and the 14th largest worldwide.[2]

Registration for ConFuzzled 2011 opened at 9am on the 30th August 2010[3]. Residential registrations closed on 31st March 2011, with attending only registrations remaining open until 29th April 2011[4].

Rates for 2011 were split into four types. A basic attending only ticket showed an increase from the previous year from £60 to £75, while the residential package was split into two - a basic residential package at £195, and a residential 'plus' option (including a t-shirt and limited edition comic) at £210 (based on a double/twin room). The sponsor package was priced at £245. Registrations made and paid for before 8th January 2011 received a £10 discount. Upgrade options were available for those that wished to increase their membership level or duration of their stay, and Confuzzled 'Gift vouchers' were offered for those wanting to give registrations or upgrades as presents[5].

Towards the end of February 2011, it was announced that there had been sufficient registrations to secure the entire hotel for sole use by the convention[6].

There was a total attendance of 499 furs from 20 different countries[7].

According to the IOSF newsletter, £4000 was raised for charity,[9] but this was later clarified by chairman Matt Lion as being an early estimate, and the official final figure was £5400.

On August 31, 2011, ConFuzzled's finance director Nall announced that, in fact, Microsoft had contributed more than the original estimate, and the final charity total was revised yet again to £9800.[11]

On September 10, 2011, in an announcement about registration for ConFuzzled 2012, Matt Lion announced that, due to a donation from DH Winterwolf, the final total had reached £10,000.[12]