ConFuzzled 2010 was the third rendition of the British convention ConFuzzled. It took place from May 7 to May 10, 2010 in Didsbury, Greater Manchester, North West England at the Britannia Country House Hotel. The theme was science. ConFuzzled 2010 was attended by approximately 346 people[1], an increase of 90% over the previous year[2]. The guest of honor was TaniDaReal. The charity was Wildlife Heritage Foundation.

Registration for ConFuzzled 2010 opened at 6pm on the 17th August 2009 with some help from EuroFurence with the new registration system. Due to the change of venue this year, payment deadlines were set in order to confirm basic attendance numbers with the hotel. As the new venue was significantly larger than previous years, there was plenty of room for more attendees than the YHA could accommodate; even if registration appeared full, potential attendees were still urged to register their interest to allow staff to look into booking extra blocks of rooms.

Rates for 2010 showed a slight increase from previous years to cover the costs of the new venue. The basic attendance fee increased from £50 in 2009 to £60, while the standard package increased by just £10 as well (based on a double/twin room) to £170. Upgrade options were available for those that wished to increase their membership level or duration of their stay. 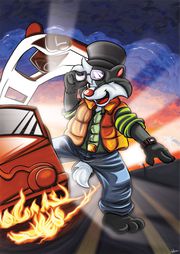 There was a total attendance of 346 furs from 17 different countries.[1]

Many events that took place during ConFuzzled were themed or based upon science. This included special events including science experiments and a talk from a physicist from the Large Hadron Collider.

The Fur-e-okie event was won by Ember Komodog, who performed Gold by Spandau Ballet.[3] The winner of this event was decided by a "clap-o-meter" (actually a decibel meter) and awarded a special Fur-e-okie trophy.

The WikiFur pub quiz was won by the "Goddamn Furries" team which consisted of Alexander Grey, Equium, Cerebus, Kuga, Spinky, and Stuart Otterson.

ConFuzzled 2010 was particularly famous for its charity auction, which saw the ConFuzzled record for largest bid broken twice[2] prompting a storm of responses under the #CFz2010 and #tanicloth hashtags on microblogging website Twitter.

Towards the end of the auction the opportunity to feed wild cats in a non-public reserve located in Kent arose, which after several minutes of bidding was won by Kivuli for £550 ($814)[2].

The final item placed on the auction was a tablecloth which contained an ad hoc image drawn by the conventions guest of honor TaniDaReal. From a starting bid of £50, the bidding for the item ballooned to over £1,500 ($2,221) after a fierce bidding war between Beshon and convention staff member Colifox, which ended with Beshon bidding a total of £2,000 ($2,962), the same as the total raised throughout the entire of the 2009 auction[2].