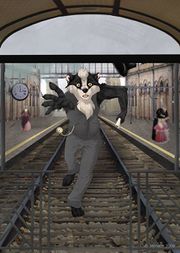 ConFuzzled 2009 was the second rendition of the British convention ConFuzzled. It took place on May 22 to May 25, 2009 in Manchester, North West England at the Manchester International Youth Hostel. The theme was Victorian era England, and attendance reached 182 people. £2,000 was raised for charity.[1] The charities were The Badger Trust and Manchester Dogs Home.

Registration was opened at 9pm BST (UTC+1) on the 31st July 2008. It was the first ConFuzzled to offer an attendance only rate for those that lived locally or wished to stay in local hotels. The attendance only rate did not include food at the hostel and was limited to 51 places. Prices were £50 attending, £160 standard (including accommodation and food), and £200 sponsor. The standard and sponsor rates were cheaper than those in 2008. "Early Badgers" who registered and paid before the 2nd September 2008 got a £10 discount.

Following feedback from attendees, many popular events returned from ConFuzzled 2008, in addition to extra gaming events, an anime talk, writing workshop and the Guest of Honour events, a cartoon workshop hosted by Tabbiefox and a talk on running a convention by Cheetah.

This year, the convention hosted the first UK PawPet Show, created, developed and performed by PawPets UK, a group formed out of members of ConFuzzled staff and talented attendees for the purposes of producing a show for ConFuzzled.

The show followed a similar format to Eurofurence’s LSD show in that it was a story based theatrical three act play with comedy, music and some drama, though the UK show focused on a more skit based comedy style and Pantomime.

The Great James Mountbatten-Windsor's Magnificent Zoological Extravaganza (or The Mancunian Play), was the title of the show and it told the story of four performers and their stage manager as they attempted to put on a variety show in what they soon discovered to be a haunted theatre.

The show featured custom built puppets for all of the main characters, guest starred FurbleFox, the ConFuzzled Convention Chairman, and also featured a brief cameo by Uncle Kage.

Tabbiefox was announced as the first guest, having last year created the artwork for the convention's mascot: Brok the Badger.

Cheetah was announced[4] as the second guest of honour on the 11th of February. He provided inspiration and advice to the ConFuzzled Staff in helping to establish CF and it was felt fitting that he should be repaid for the help he provided.

On May 1, 2009 ConFuzzled released a mobile events guide for usage on PDA or Mobile Phone written in Java, by Dingotush.[citation needed]